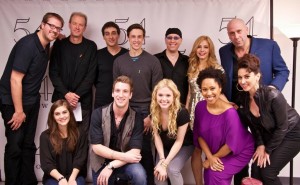 The evening began with a song from John Arthur Greene and continued to flow with his Broadway pals showcasing a variety of songs ranging from Take me Back to Manhattan to Ain’t no Sunshine to original songs by John Arthur Greene and Jeremy Schonfeld.  The artists who performed at the event included: Marisa Kennedy (Matilda), Lesli Margherita(Matilda), MacKenzie Grace Mauzy (Tale of Two Cities, Next to Normal, Into the Woods film), Jeremy Schonfeld, Jason Michael Snow (Book of Mormon), Laura Dreyfuss (Hair) & Leigh Ann Larkin (Gypsy and A Little Night Music).

“The performances were magical–one after another–the level of talent in the room was staggering,” said Robert Accordino, the US Founder & President of M4A, “the evening could not have been more enjoyable, and we were all so grateful for our Broadway performers spending their night off with us to donate their talents in support of our work.”

Though there were many highlights of the evening, the live auction led by John Arthur was quite exciting and eventful.  The items up for auction were two of Jeremy Schonfeld’s CDs, a poster from Matilda on Broadway signed by the entire cast, and a Playbill from Book of Mormon also signed by the entire cast.  All the proceeds of the auction were donated to Music for Autism.

The evening closed with a testimonial from John Arthur Greene about his experience performing at Music for Autism concerts and a little bit about his year as the Spotlight Artist.  Greene explained how seeing the excitement in the children’s eyes when he performed was an incredible experience. He said, “when we’re all lost trying to find our way, I hope music can be our home.”

Be sure to check out the Music for Autism Facebook Page for more photos. 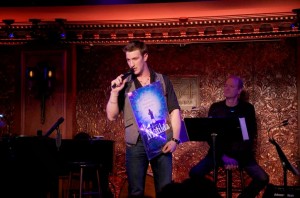