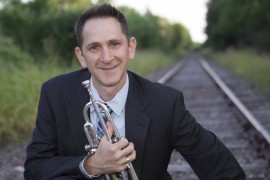 Originally from Santa Monica, California, Dr. Gardner received his Bachelor of Music from the Eastman School of Music with highest distinction, his Master of Music from Rice University – Shepherd School of Music, and his Doctor of Musical Arts from the Manhattan School of Music.  While in New York, he worked with former principal trumpeter of the Metropolitan Opera Orchestra, Mark Gould, and the former second trumpet player of the New York Philharmonic, Vincent Penzarella.  Dr. Gardner’s thesis is based on Penzarella’s pedagogical techniques and philosophies, which include innovative ideas on breathing, air usage, and brass playing, as well as performance psychology.

Dr. Gardner has been teaching students for more than a decade.  Prior to his appointment at OSU, Dr. Gardner served as the Assistant Professor of High Brass and the Jazz Band Director at the University of Arkansas – Fort Smith.  In New York, Dr. Gardner enjoyed a successful free-lance and teaching career.  He held faculty positions at the Manhattan School of Music Precollege, Third Street Music Settlement, Music Conservatory of Westchester, Greenwich House Music School, and Meyer London School, as well as at the Manhattan School of Music Summer Camp.

Under the direction of Dr. Gardner since 2011, the Oklahoma State University Trumpet Studio has taken extraordinary strides.  Dr. Gardner’s students have been accepted on scholarship into distinguished graduate programs including the New England Conservatory, DePaul University, Carnegie Mellon University, University of Southern California, University of Louisville, University of Colorado and University of Texas-Austin.  At the 2012, 2013 and 2014 International Trumpet Guild Conferences, the OSU Trumpet Ensemble received rave reviews and standing ovations for their performances.  Dr. Gardner’s students have achieved success at the regional, national and international levels, most recently winning the 2014 National Trumpet Competition Trumpet Ensemble Division and International Guild Scholarship awards.

Dr. Gardner, outside of his work at the University, maintains his private studio and additionally gives master classes and lectures internationally while continuing to perform.

Dr. Gardner has been privileged to work with artists such as Ray Charles, Doc Severinson, Wayne Bergeron, Harry Watters, Lenny Pickett, Mark Inouye, Don Green, Allan Vizzutti, the Canadian Brass, Michael Tillson-Thomas, Esa-Pekka Solonen, and David Zinman, to name a few.  He can be heard on the Naxos, Mark Records, and BX Entertainment labels and is a Bach performing artist and clinician.

Holding memberships with professional associations, Dr. Gardner actively participates with the International Trumpet Guild, College Music Society, and National Association of College Wind and Percussion Instructors, as well as the National Trumpet Competition.  In 2010, Dr. Gardner was honored for his philanthropic work as Spotlight Artist of the Year by Music for Autism.  He is now the Artist Coordinator for Music for Autism, programming music nationally for those with autism and their families, and most importantly, helping raise awareness and advocating for those with autism.