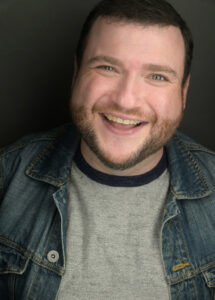 He has starred in four Broadway shows: …Spelling Bee, Grease, Chicago and Cinderella. On television, he has guest-starred on many fan favorites such as Grey’s Anatomy and The Unbreakable Kimmy Schmidt and was featured as one of 30 Rock’s most memorable recurring characters: Jeffrey Weinerslav.

Todd has traveled the U.S. with The Play That Goes Wrong, Chicago, and Godspell.

As a cabaret artist, Todd has performed in all the great cabaret spaces of New York City and Los Angeles. He has performed his one-man-show, Lying In The Driveway & Other Stories in NYC and Virginia.

As a teacher, he has given masterclasses all around the U.S. and teaches regularly at The University of Michigan (his Alma Mater) and The New York Film Academy. A proud member of Equity and SAG-AFTRA, Todd also serves as a Councilor for Actors’ Equity Association.

Registrants will receive a link to the private live stream two hours prior to the concert. You must RSVP to receive the link.

This concert has been generously underwritten by the many wonderful donors of Facebook.