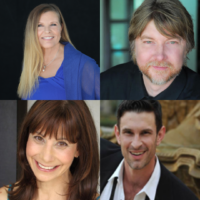 Eydie Alyson starred as “Audrey” in Little Shop of Horrors during its award-winning Off-Broadway run at the Orpheum Theater, directed by the show’s original co-creator, Howard Ashman. Eydie made her Broadway debut as “Chava” in Fiddler on the Roof at Lincoln Center, and toured in three National Companies of Les Misérables, including the original Los Angeles and San Francisco companies.

Brad Ellis is one of the most respected and sought-after music directors and arrangers in the concert and musical theatre communities, he has appeared as a piano soloist with dozens of orchestras, at Carnegie Hall, Lincoln Center, the Kennedy Center, Wolf Trap, and local halls from Maine to California and London to Beijing. Brad also enjoyed fame as the on-camera pianist on the hit television series Glee.

Dianne Fraser, a frequent performer in concert and cabaret, has sung at such venues as New York’s 54 Below and The Metropolitan Room, San Francisco’s Rrazz Room, and, in Los Angeles, at Rockwell Table and Stage, the Catalina Jazz Club and Feinstein’s at Vitello’s. Dianne has appeared in leading roles, at various regional theatres, in such shows as The Music Man, She Loves Me, Once Upon a Mattress, Anything Goes, and The Baker’s Wife. She was nominated for a Bay Area Theatre Award for her work in 42nd Street Moon’s production of The Boys From Syracuse. She is currently recording her debut album, You and I – the Words and Music of Leslie Bricusse.

Damon Kirsche is a veteran of stage, screen, concert and cabaret. Trained at Julliard, he has performed leading roles in classic and original works from coast to coast in such shows as 42nd Street, Oklahoma!, Camelot, The Rocky Horror Show, Dear World, My Fair Lady, Paradise Lost, Thoroughly Modern Millie and Spamalot . For nearly 20 years, Damon has been a lead singer with Dean Mora’s vintage orchestras, performing and recording American popular song from Ragtime through the late big band era. His screen credits include the films Pushing Dead and Gods and Generals and the television series Star Trek: Voyager.

We are thrilled to have these veterans of stage and screen with us for this very special performance!

Please RSVP using the form below. If you have any trouble using this form, you can RSVP by emailing rsvp@musicforautism.org.