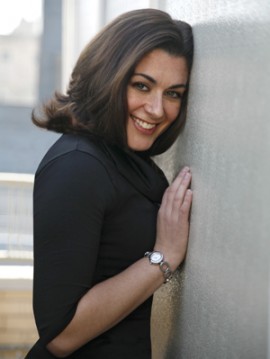 Deborah Hurwitz is a millennial renaissance woman living in Manhattan and Los Angeles. Trained as a concert pianist with a major solo debut at age 12, she discovered the joys of electronic production in the studios at Princeton University and brought both musical worlds together in New York as a composer, conductor, producer and performer. She originated her onstage role in the Broadway hit musical Jersey Boys, which won the 2006 Tony Award for Best Musical and the 2007 Grammy Award for Best Cast Album, and she also serves as the Music Technical Designer and Synth Programmer for all Jersey Boys companies worldwide, including the First and Second National U.S. Tours and resident companies in Chicago, Las Vegas, London, Toronto, Sydney and Melbourne. She made her Broadway conducting debut with Miss Saigon, played keyboards for Jekyll and Hyde and The Who’s Tommy and toured with the First National companies of Mamma Mia!, Miss Saigon and Aspects of Love. As part of these hit productions, she has appeared on The Tonight Show, The Late Show with David Letterman, CNN’s Showbiz Tonight, E! Entertainment Television, The 2006 Tony Awardson CBS, half a dozen national morning shows and twice at The White House. In 2011, she was thrilled to make her debut with Cirque du Soleil as the Music Director of their spectacular new resident production in Los Angeles, IRIS: Journey Through the World of Cinema, featuring a full orchestral score by Danny Elfman.

Deborah has also composed extensively for television and film, including Emmy Award-winning shows ranging from Guiding Light to Sesame Street. She scored the cult favorite horror feature HPE and created arrangements for feature films The Crossing Guard (Miramax/Jack Nicholson) and City of Industry(MGM/Harvey Keitel), working with director Sean Penn and legendary producer Phil Ramone. She wrote a dance piece for Jennifer Muller/THE WORKS that toured the world for three years and she was featured in Lincoln Center’s Meet the Artist series.

In the recording industry, Deborah has worked as an arranger and conductor for platinum artists such as Sinead O’Connor, Diana King and Sarah Brightman, and she was the Vocal Director of the soundtrack to the ABC Muppet Special Elmopalooza, which won a Grammy for Best Children’s Album. She spent four months on tour with Cyndi Lauper and Cher as a keyboardist and vocalist, released her debut CD Nice Girls Do as indie artist Deborah Marlowe and became addicted to glitter eye shadow, vinyl pants and 20,000 screaming fans. How to follow up? Don full body paint and conduct a 600-person nude opera at the Burning Man Festival in Nevada, obviously. Deborah’s desert adventures inspired her to take up a second residence on the west coast, where she duplicated her New York studio and began avoiding east coast winters at her Santa Monica beach pad.

Shuttling back and forth every few months, she created full-length concept albums and music directed live workshop productions of Funny Business, a show about stand-up comics, A Day in the Life of America, a collection of stories told through dance to updated classic rock tunes, the Gothically inspired Dorian Gray and Sheba: The Musical , a biblical epic built on gospel funk and Middle Eastern disco. Those same years in broadcast media yielded original songs and scores for festival favorites such as short film The Reader, a music video starring Deborah called Just a Dress, about sexual harrassment on the streets of New York, industrials for Intel and Samsung, and award-winning new media ‘edutainment’ like OneMoreStory.com, which presents classic children’s books as narrated, animated pages for children and their parents to read. A staunch advocate of education, she was honored to join the faculty of The Berklee College of Music as an Associate Professor in the Professional Voice Department after a well-received guest lecture. And somewhere between launching the first Jersey Boys Tour and opening Jersey Boys Chicago, Deborah released her second solo CD Naked Wire and composed the opening sequence for The Veronicas’ summer tour with Ashlee Simpson.