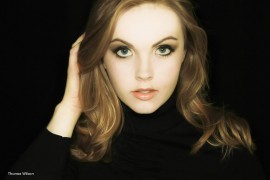 CASSANDRA (born Cassandra Eileen Kubinski in Hartford, CT) is a songwriter, singer, actress, producer, and yogi. Her latest release is her 4th album JUST BEING MYSELF (produced by Edd Kalehoff, the composer/producer behind the music of Monday Night Football, The View, Good Morning America, the YES Network , Disney, Carnival Cruise Lines, and artists like Faith Hill, Britney Spears, and Sarah Vaughn).  “This one’s more cinematic than my previous albums, and more fun,” offers Cassandra. “Each song is like a mini-movie, and my writing is more honest than I’ve ever been before” And whether she’s writing about love, bittersweet memories, partying, air travel, or the Big Apple, that real-world honesty meets a dramatic, sensual swirl of cinematic images and metaphors influenced by her earliest musical experiences: Billy Joel and other songwriters, Disney movies, musical theatre, classical and jazz. Several music videos have already been released, including Just Being Myself, the classical/dance/pop anthem of being awesome, and Windblown Girl, a country-tinged romance story.  The album also features pop/jazz trumpeter Chris Botti on the lush, Paris-inspired number “Je T’aime”, and a re-imagined version of Lady Gaga’s “Bad Romance.”

Cassandra’s previous albums (Live at Camp Nashville (2010), Hold the Sun (2007), hiding underneath (2005) established her on the singer/songwriter scene in NYC and elsewhere, as she toured the US (Borders Books and Music national “Artist to Watch” 2008) through clubs, coffeehouses, colleges, private homes, benefits, and everywhere she could jump on a piano and sing. Further-flung places like Germany and Jamaica followed, and she found herself opening for the likes of Anna Nalick, Dickie Betts, Big Shot, and Ingram Hill. Her music also started receiving radio airplay and placement on TV (MTV, Lifetime, Food Network, Bravo, more) and films (Dare (Sundance feature), Red Hook, Life’s Passing Me By), including many songs produced with TRIFECTA, one of her production teams.  The songs “Somebody Told Me”, “Halfway to Heaven”, “Save You Tonight” and “Twisted” were all recently featured on the Lifetime TV series “Dance Moms” and the iTunes compilations from the show as well.

After 5 years in New York, Cassandra moved to to Nashville, TN, and spent most of 2009 assisting with the opening of a showcase venue, writing with some of country’s biggest hit writers, and exploring the Nashville live performance scene and business. 2009 also saw the release of Clear Blue Tuesday, a rock movie/musical following the lives of 11 New Yorkers in the 7 years post-9/11. “It was incredibly collaborative, because the entire story was developed through improv over the course of 9 months, and every actor wrote the songs their character sings in the movie.”

By 2010, Cassandra was ready for the pulse, passion, and challenge of NYC once again, and moved into the heart of Manhattan. Since her return, her career has expanded to include voicing jingles and voice-overs for brands like Maybelline, Hasbro, Barnes and Noble, and Twizzlers, and she now regularly develops songs on commission for artists, brands, and events. “But I’m most excited about being onstage and performing live, in support of the new album,” she smiles. “I’ve been in the studio, which is awesome because it’s a controlled environment of making magic, but nothing is more magical than creating a spark with real people in the audience, an experience you share for a moment that can never be duplicated.”

Cassandra grew up in Enfield CT, graduated Florida State University with a BA in Theatre, and is also a certified yoga instructor and certified chocoholic. She also regularly performs in AIDS hospitals for LifeBEAT www.lifebeat.org She is proud to be a BMI songwriter, Screen Actors Guild/AFTRA member, and a member of Nashville Songwriters Association International(www.nashvillesongwriters.com) and the NY Chapter of Women In Music (www.womeninmusic.org)