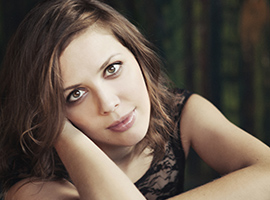 “Elegant (…), refreshingly temperamental” (The New York Times) French-Romanian pianist Alexandra Joan is an active soloist and sought-after chamber player who has performed at major venues and festivals in Europe, Israel and in the United States, such as Weill Hall at Carnegie Hall, Alice Tully Hall at Lincoln Center, Bargemusic, Dame Myra Hess Series. Her solo and chamber music performances have been featured on Radio France, Radio Suisse Romande, Arte TV, and WQXR in New York. She is a recipient of the “Vocation” Award in France, a prizewinner of the Andorra and the Josef Suk International Competitions, and of the Arriaga Chamber Music Competition with Vasko Dukovski and Ismail Lumanovski.

She released her first solo CD “Dances and Songs” in 2014 on the Victor Elmaleh Collection.

Alexandra Joan received degrees from the Paris Conservatory and the Juilliard School. Her principal teachers include Rena Shereshevskaya, Brigitte Engerer, and Jerome Lowenthal. She is currently a doctoral candidate at the CUNY Graduate Center and is studying with pianists Ursula Oppens and Richard Goode.