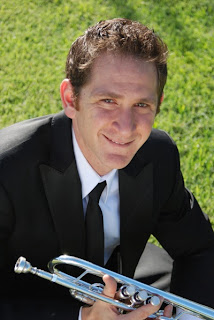 Music for Autism’s musical programming committee has unanimously selected trumpeter Ryan Gardner as its 2010 Spotlight Artist. As the first musician to perform with M4A in the United States, Ryan set the bar high with his level of enthusiasm and interactive programming. In addition, Ryan has been instrumental in connecting M4A to other exceptional artists who have performed with M4A in New York City and Houston. For example, M4A’s successful collaboration with the Shepherd School in Houston is a direct result of Ryan’s connection to Marie Speziale, his former professor and chair of the Brass Department.

Originally from Santa Monica, California, Ryan currently resides in Fort Smith, Arkansas where he is assistant professor of High Brass at the University of Arkansas-Fort Smith. He received his bachelor’s with distinction from the Eastman School of Music, his master’s from the Shepherd School of Music and his doctorate in Trumpet Performance from the Manhattan School of Music. He has performed extensively in major symphony orchestras such as the Los Angeles Philharmonic and in chamber music settings. He is also an active teacher who believes that music should be accessible to all. He is committed to outreach and interactive programming that aligns ideally with the mission of M4A.

“I feel so privileged to be a part of this venture and I truly believe that the work we do benefits those with autism and their families probably more than we will ever know,” said Ryan. “I look forward to continuing to work together and to helping in any way.”

“Ryan has already proven himself to be a extraordinary champion of our cause, and this is just the beginning of our relationship,” said M4A’s Executive Director Robert Accordino. “We congratulate Ryan on this tremendous achievement. We are honored by his work with us and look forward to the work we’ve yet to do together in serving those with autism and their families.”