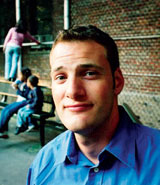 Chesa has translated, edited, and authored several books. His most recent book, Gringo: A Coming of Age in Latin America, was published by Scribner in 2009. His scholarly law articles cover a range of topics including such as direct democracy, immigration, institution building, and criminal law. Chesa currently works as a San Francisco public defender on a Liman fellowship.