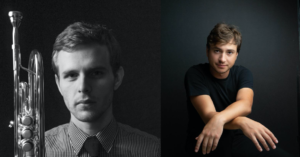 Gabriel Medd played his first gig at the age of ten, and has been performing on his trumpet ever since. The Iowa City native has occupied venues at the North Sea Jazz Festival, Monterey Jazz Festival, Iowa City Jazz Festival, Jazz Standard, Iridium, Chicago Jazz Showcase, Dizzy’s Club Coca-Cola and the Blue Note.

He has embraced opportunities to blend his ideas and sounds with those of other incredible musicians, including on today’s virtual concert with Luke Celenzia!

Luke Celenza grew up surrounded by music and began studying classical piano at age 5. In 2010, Luke attended The Juilliard School where he studied with well-respected jazz greats Frank Kimbrough and Kenny Barron. Upon graduating in 2014, Luke collaborated with his brother, Frankie Celenza on what would become a 5-time NY EMMY® Award-winning cooking show called Frankie Cooks. Luke also has 2 jazz albums available on all digital platforms.

Registrants will receive a link to the private livestream two hours prior to the concert. You must RSVP to receive the link.

This concert welcomes Chaz and the Rumble family to Music for Autism!